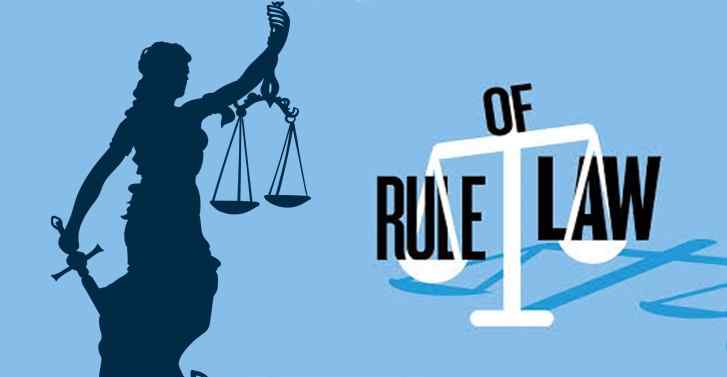 It emphasizes the concept that the government can't run in its own way as they want but it has to follow some principles of rule of law. The concept is originated by Edward Coke andÂ  the theory is laterÂ  developed by A.V. DICEY inÂ  the book " INTRODUCTION TO THE LAW OF CONSTITUTION "
It is the fundamental concept of BRITISH CONSTITUTION.Â

THREE PRINCIPLES UNDER RULE OF LAW :

It means that law is supreme and everything is governed by law. In a leading case it was laid down by the Honourable Supreme court that the rule of law is the part of the basic structure of the constitution.

2)No MAN IS ABOVE LAW

It means that it doesn't matter how much superior a person is but under the principle of rule of law, the law is the superior one and everyone is below the authority of law. It means that all are equal in the eyes of law. Its emphasis on A - 14 of the constitution which talks about equality of law

CONSTITUTIONAL RIGHT ARE THE RESULT OF JUDICIAL DECISIONS.

Professor DICEY said that there should be no discrimination and injustice in law. If the rule of law will not there, then it can lead to a situation of chaos and lawlessness.Â  The motive behind developing this principle is that the ruler should be under the law. The law should be the same for all irrespective of power and money.Â
This concept as developed by professor DICEY is a good concept, as it promotes equality among people.Â

Note:- We try our level best to avoid any kind of abusive content posted by users. Kindly report to us if you notice any. This report may be copied from a news/channel/magazine/blog/site for knowledge sharing, where PathLegal DISCLAIM any ownership of the content posted and offer NO warranty about the data. In case of any objection, please do write to [email protected]

Site map       PathLegal, Bahrain lawyers directory listed lawyers and law firms and their supported services from Bahrain. Here is the place where both clients and lawyers from Bahrain & world wide can connect each other in a better way.